This is part four in a series on Evolution, Original Sin, and the Atonement. To start at the beginning, click here.

Wow, it’s been a while since I posted last. The break I took from blogging was both intentional and necessary. I began this series on accepting the reality of evolution and theorizing about its effects on the Christian faith, hoping that my writing would spark others to think more critically about their own beliefs, and also that my own thinking would be sharpened on the subject. While I did find that this happened a little bit, I also found that I was being attacked for rejecting some of my previous beliefs. In particular, one of my blog posts, the introduction to this series, was posted on Ken Ham’s (a well-known[?] creationist/speaker) by a family friend. Though I do not think the friend intended for the consequences of her actions, this led to a smattering of public, ignorant criticism by people who do not know me or my family, which could have negatively affected my current occupation, since I work at an Evangelical university that stands on a few of the “truths” I so readily attempt to deconstruct.

All that aside, I’m hoping to get back into a regular blogging schedule, hopefully 2-3 times per week. I will continue exploring these ideas with the help of some writings on the internets and the work of Peter Enns, and hope that I can clarify my own thoughts in my writing and push you, dear reader to do the same.

Last time, I wrote about the direct effect that accepting evolution has on some traditional Evangelical doctrines – particularly inerrancy. In other words, I think it is important to accept evolution as a defining reality of the physical universe, as observations from the last 150 years have proven to continually support evolution as a natural reality. As such (and because I do not think it to be an orthodox Christian belief), I think inerrancy is insufficiently supported and should be rejected by Evangelicals as a core doctrine. I’m not saying biblical authority should be rejected – only the notion that Scripture itself is “inerrant.”

To continue in the series, I think it is necessary to examine the effects of evolution on some of the doctrines Christians hold sacred. And I’d like to begin with the doctrine of Original Sin.

Generally, the doctrine of Original Sin is defined across the board as humanity’s universal rejection of God’s will. Not only that, but humanity is born with a natural inclination to reject the kind of life God desires for humanity. This happened as a result of Adam’s initial rejection of God’s command in the creation story; Adam sinned as some kind of representative of humanity, thus we are all sinners.

This view is further supported by texts like Romans 5:12-21 (where we have the in/famous “through one man, sin entered the world” bit) and 1 Corinthians 15:21-22, and 44-49. This is not to mention the fact that Paul probably believed in a literal Adam. He would have had no reason not to. So, if Evangelicals want to ignore the entire paradigm upon which modern biological science is built and attempt to retain an outmoded and unwarranted doctrine like inerrancy, it seems likely that Original Sin as “traditionally understood” can be maintained. If, however, Christians desire a robust theology that can (ahem) handle something like evolution, then we need to rethink Paul’s statements about Adam as the originator of sin. 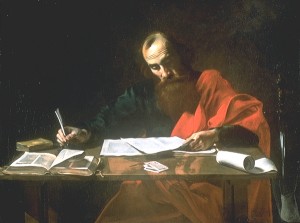 Let me be clear here: what I AM saying is that I think we need to reject Paul’s acceptance of Adam as a historical figure and the cause and origin of sin, especially in light of evolution. I’m NOT saying that sin is not a reality, even a universal one. I follow Enns here, where he says we should not focus on the historicity of Adam from Paul’s perspective, but what Paul was trying to say in his letter to the Romans and the Corinthians. In particular, it seems that Paul’s focal point is always the Crucifixion and Resurrection as the solution to a particular problem. This problem, to Paul, is death. Enns says it this way: “Paul uses the theological vocabulary available to him, and so names the root cause of that universal dilemma [the existence of death] as Adam and his disobedience.”[1]

Further, it’s no secret that the Christian concept of Original Sin is not one that exists in Judaism. Perhaps one veiled reference may exist in Habukkuk 6:7, but most scholars (even Evangelical ones!) not that the “Adam” referred to by the author is meant to be the name of a place, not a person.

To conclude, I’d like to quote Enns one more time. Regardless of Paul’s (faulty, through no fault of his own) view of human origins, three very important elements remain in his theology, despite the acceptance of evolution:

1. The universal and self-evident problem of death

2. The universal and self-evident problem of sin

3. The historical event of the death and resurrection of Christ

To remain within the bounds of orthodoxy, I think one must accept the above three claims. Nonetheless, the question remains: in light of evolution, what is sin, how does it affect us, and why is the cross a solution to that problem?

This post is a preface/intro to a series I’m starting on synthesizing the theory of evolution with Christianity. I plan on writing a post at least once a week on this topic (hopefully more, but we’ll see).

I’m about to graduate with my B.A. in Theological Studies. I basically finished my final assignment this week, which means I have had time to do some reading that I actually want to do. My book list has at least 50 books on it, and that’s just ones I could think of off the top of my head. I was so excited to finally get started this week, and my first choice (since it was at the library) was Peter Enns’ The Evolution of Adam. 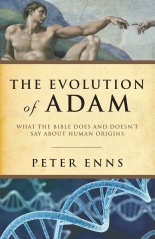 While reading it, I was struck again and again by how much the acceptance of the reality of evolution will truly change a theological system if that system doesn’t allow for anything other than special creation and a historical Adam. The acceptance of the theory of evolution as true (which I do) is a step that takes serious consideration, especially for Evangelicals. (As an aside, I’m guessing the best way to classify myself at the moment is some kind of progressive [little e] evangelical… whatever that means.) Anyway, the point is, most of the Christians I am in contact with are Evangelicals in the strictly fundamental sense – for the most part.

Because of this, my desire is to show those around me that not only is it simply acceptable to accept evolution as true – it’s necessary. It’s especially necessary if the Evangelical community is going to have any kind of credibility with the rest of the world in the future. However, this also means that the Evangelical theological system needs to change dramatically. Specifically, I think the acceptance of evolution affects two major areas, which I’ll be addressing in the series:

Of course, these aren’t the only theological areas evolution affects. It will, of course, also affect our understanding of the nature of God’s relationship to the universe, God’s character itself, the very being of God, and so on. However, this series’ focus will be on the two subjects outlined above. 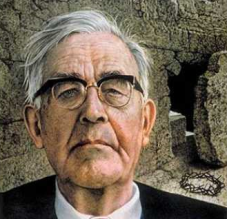 At the outset, I should also mention one other issue. This will probably have some kind of effect on how many of my readers view my understanding of the rest of the posts in this series, but it needs to be said. I do NOT affirm that Scripture is inerrant (and I’m a little iffy on infallibility as well, but I’m not sure that’s relevant). To be clear, I am not saying that I think Scripture is useless or simply another document that is inspired in the same way that Shakespeare or whatever is an “inspired” piece of work.

Rather, I am strictly Neo-Orthodox in my understanding of Scripture. Karl Barth, the father of Neo-Orthodoxy probably spells out my view of Scripture best. He says that Scripture itself is not the Word of God, but the Word is an event, to which Scripture is a witness. And although the “witness is not absolutely identical with that which it witnesses,”[1] it can still be trusted to convey the Word of God in some sense – even while we cannot necessarily trust it to always convey propositional, historical truth.

The idea of the “Word of God” becomes pale and anemic when reduced to the idea of a factual description of historical events. The words of the Bible, wonderful as they often are, must not be allowed to stand in for God’s majestic Word, as if the words and phrases have been conferred with some sacred status and the phonetic patterns given divine power.[2]

All this to say, my view of Scripture may or may not be similar to yours. Nonetheless, approach this series with an open mind, and at least be willing to question some longstanding beliefs you might be holding. You wouldn’t want those to become idolatrous, would you?
DISCLAIMER: My views are not the views of Southwestern Assemblies of God University. I in no way represent the views of the Assemblies of God or SAGU in this particular post or any posts or articles found on this blog.

[2] Peter Rollins, The Fidelity of Betrayal: Toward a Church Beyond Belief (Brewster, MA: Paraclete Press, 2008), 56.